A perfume of Syria

Posted on September 10, 2015 by laurencetotelin

As the crisis in Syria and the Middle East intensifies, and as refugees reach Europe in their thousands, Big Boy T (aged 8) has been asking difficult questions. For instance, he asked me how I could admire Hadrian’s Wall but despise modern attempts at building border fences. I answered that I liked what remains of Hadrian’s Wall, and that I found it interesting that the Romans could be mad enough to build a border around their Empire, but that I certainly did not approve of such enterprises. But still, T’s queries bring me back to the questions that all historians ask themselves: why am I studying the past? Am I trying to find lessons there, a task usually doomed to failure? Am I trying to send modern messages by using the past?

I chose to be an ancient historian because I loved the languages and the Greek and Roman cultures, but to be perfectly honest, there is a certain cowardice to my choice. I can look at the past in the safe knowledge that it is far, far away. I do not have to deal with living people, or descendants of historical actors. I deal with texts and artefacts that will not answer back. My colleagues may, but the distance will still remain. In the blame games of international politics, very few think of pointing the finger at the Hellenistic and Roman Empires – the villains are much closer to our times. Still, the remains of those civilisations are symbolically important enough to be consciously destroyed, as they are at Palmyra. 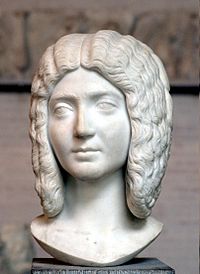 A bust of Julia Domna, with her instantly recognizable coiffe. Munich. Source: wikipedia

I find it extremely sad that my children have only ever heard the word ‘Syria’ in the same sentences as the words ‘war’, ‘crisis’, and ‘refugees’ (or some other – much more derogatory – words). So I want to tell them something else about Syria, something uplifting. I could talk of Zenobia, featured in a recent Independent article, but I am not that familiar with her. So I will tell them about another woman, a strong woman who became a Roman Empress: Julia Domna.

The man who would one day become Roman Emperor (193-211 CE), Septimius Severus, a Roman official, had lost his first wife and was looking for another companion. The Historia Augusta, a source reputed for its unreliability, tells us that he found his new wife in the following manner:

He had meanwhile lost his wife, and now, wishing to take another, he made inquiries about the horoscopes of marriageable women, being himself no mean astrologer; and when he learned that there was a woman in Syria whose horoscope predicted that she would wed a king (I mean Julia, of course), he sought her for his wife, and through the mediation of his friends secured her. By her, presently, he became a father. Historia Augusta, Life of Septimius Severus 3, translation: David Magie.

And as their destinies were bound in the stars, Septimius Severus wedded Julia Domna, the daughter of a high-priest to the god Elagabalus, the Mountain God of Emesa in Syria.

Fast forward a few years and Septimius Severus is now Roman Emperor. Julia Domna is an influential trendsetter in philosophy, the arts, and in fashion. She wears her hair (or wig) in a way that is instantly recognizable. 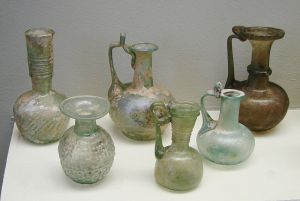 Second century Roman glass. Some of these bottles may have contained perfume. Source: Wikipedia.

One of the physicians at the court of Julia Domna was Galen, the most prolific and famous physician of antiquity. Galen never mentions Julia by name, but there are in his work some allusions to Roman princesses that may well be directed at her. He tells us that, although he abhorred cosmetics, he felt compelled to include some cosmetic recipes in his own works because ‘royal women’ pushed him to do so:

To make the colour of the face whiter or redder with concoctions, or make the hair on the head thick, or flame-coloured, or black, or longer, as women do: these and other similar stratagems are the vices of embellishment and not the work of medicine. But… royal women or even the kings [i.e. emperors] themselves sometimes assign to me tasks to do with embellishment, and it is not possible to refuse them by explaining that embellishment differs from the cosmetic part of medicine. Galen, Composition of Medicines according to Places 1.2

Nice one Galen: blame your patrons for writing what your readers really want to read. I can almost hear them: ‘enough of these recipes against alopecia, we want nice cosmetic recipes’.

His dislike for cosmetics did not prevent Galen from using some extremely expensive perfumes in his medicinal preparations. In his pharmacological works, he often refers to a ‘Syrian perfume’. What ingredients that perfume included, we do not know exactly, but it must have been one of these heavy, heady perfumes the Romans enjoyed.

The Syrian perfume, however, had not always been called ‘Syrian’. Galen tells us: ‘I have decided to call “Syrian perfume” the “Commagene perfume”, because it is brought to us from Syria’ (Galen, Composition of Medicines according to Places 2.1). What happens here is that Galen found in his sources references to a perfume called ‘Commagene’, that is, coming from the kingdom of Commagene, near Syria. By the time of Galen, that kingdom was no longer in existence. Galen decided to simplify matters by calling the perfume ‘Syrian’. He was not the first to do so, but his conscious choice of words may have been a gesture towards his patron, the Syrian princess Julia.

In the second-third centuries CE, then, Syria was renowned for her luxurious products and for her daughter, Julia. Julia’s own son – Caracalla – would one day give the Roman citizenship to all free men inhabiting the Roman Empire (Edict of Caracalla, 212). Before that Edict, free men of – to take ‘random’ examples – the provinces Britannia and Belgica were, for the most part, not citizens of the Roman Empire. They were inhabitants of that Empire, but they did not have the title of ‘citizen’. The Edict of Caracalla may have been a mostly symbolic gesture, but what a gesture! Perhaps there are lessons to be learnt from the past after all!

1 Response to A perfume of Syria