Posted on April 8, 2018 by laurencetotelin

I last wrote on the final day of our strike action to save our pensions. Since then, I have been on ‘action short of a strike’. What that means is open to debate, but I have simply decided to work 35 hours per week, as per my contract. I have also decided that weekends are weekends and vacations are vacations. This sounds absurd doesn’t it? Being on action short of a strike means that I’m working the way I’m supposed to be working. But such is the culture of overwork in academia that even this takes effort and commitment. It is, however, liberating. I feel I may continue working like this beyond the period of industrial action. 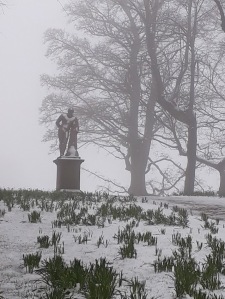 A copy of the Farnese Hercules at Chirk Castle, North Wales. Photo taken this Monday – yes it was snowing.

Much has happened in our industrial dispute over the last three weeks. Two weeks ago, late on a Friday afternoon, we were informed that our employers (UUK, Universities UK) had made an offer. That offer consisted mainly in promising the constitution of a joint panel of experts who would work on future plans for our pensions. In the opinion of many (me included), that offer was extremely vague but somewhat promising. Our Cardiff union branch, like many others, passed a motion to ask the employers to ‘revise and resubmit’ (to use a phrase that is familiar to anyone who has published in an academic journal) their offer. Unfortunately, and for reasons that remain unclear, these motions were ignored by the union leadership, and we are now faced with a vote on whether we want to accept the UUK proposal or not. I have voted ‘no’.

The issue is that, whatever the result of the vote, we don’t know what comes next. This is very unnerving. What is clear, on the other hand, is that our fight is not solely against our employers; it is also against a legal system that seems entirely in favour of ‘de-risking’ pensions, that is, moving risk away from employers and onto individual employees. I use quotation marks for ‘de-risking’ because to me this seems a most risky strategy: some employees will make ‘good’ investment choices (and note the quotation marks here too because a profitable investment is not necessarily an ethical one); others will not.

What has become clear to me, then, is that we are fighting a multi-headed monster, like the Hydra that Heracles/Hercules defeated. Ancient authors, however, debated as to whether the Hydra truly had many heads. Here is what Pausanias, the second-century CE author of a sort of travelling guide, the Description of Greece, had to say:

By the source of the Amymone [a river in Argolis], there grows a plane tree under which, they say, the Hydra, was born. I’m convinced that this beast was different from other water-snakes in its size, and that its poison was so dangerous that Heracles used its bile to treat the points of his arrows. It seems to me, however, that it had one head – not many. It was Peisander of Camirus [a seventh century BCE poet] who gave the Hydra its many heads, in order that the beast might appear more terrifying, and thereby that his poetry might become more noteworthy. Pausanias, Description of Greece 2.37.4

Touchè Pausanias! My Hydra may indeed only have one head, and I may be exaggerating for literary effect. But where exactly is my Hydra’s head located?  Where exactly do we need to concentrate our efforts? Answers will come soon, I hope. In the meantime, I choose to remain somewhat positive, since I know that the poison of the slain Hydra also has healing properties. Indeed, the geographer Strabo (first century BCE – first century CE) reported that the poison of the Hydra may have conferred healing power to a river in Elis:

Near the cave of the Anigrides Nymphs [the Nymphs of the Anigrus river], there is a source that makes the region downhill marshy and waterlogged. Most of its water flows into the Anigrus river, which is deep but slow and therefore forms stagnant pools. This boggy place emits an offensive smell over a distance of twenty stadia and makes the fish unfit to eat. There are various stories about this: some say that some wounded Centaurs washed off the poison from the Hydra there [after the battle with Heracles]; others that Melampus used the waters of the Anigrus as means to purify the daughter of Proetus [these daughters had been stricken with madness]. The bathing water there cures white spots, lichen and other skin diseases. Strabo, Geography 8.3.19.

If you wish to learn more about the industrial dispute from experts, I recommend the USSbriefs.