‘The father of Medicine’: Strike diary 2

Posted on February 26, 2018 by laurencetotelin

Anxiety over this striking business settled in over the weekend. What will be the impact of a diminished pension on my family? How will students cope with missed lectures and seminars? How will we deal with 28 days of lost income (14 days of strike are scheduled, and both P and I are lecturers)? Thoughts looping in my head, and keeping me awake at night.

On the other hand, breaking news have strengthened my resolve to strike. While writing this blog, I’m watching a Dispatches documentary on scandalous expenses claimed by those at the top of British universities. Save a thought for the poor professor who spent £1600 of public money to relocate their Maltese dog (a type of dog much loved in antiquity – see this lovely blog), when many postdocs are not even entitled to claim expenses to relocate their children.

Most lecturers, whatever their grade, can only claim very limited expenses. Most of the time, research allocations do not even cover the cost of a typical international conference. This means that most lecturers sponsor their own research, as if it were a hobby. As a scholar working in the humanities, I purchase numerous books because university library budgets do not stretch to buying research books. Even grants do not cover these costs.

A Ladybird Achievements Book: The Story of Medicine, 1972

Fortunately, I have become quite a pro at finding cheap copies of books. One way  to do so in Wales is to travel to the wonderful town of Hay-on-Wye, which has numerous second-hand book shops. We went there a week ago and I struck gold: I found a copy of The Story of Medicine. A Ladybird Achievements Book, first published in 1972. Admittedly, this does not really count as a research book, but what a wonderful example of how a discipline, and the way it presents itself to children, can move in a little over 40 years. The book does include an obligatory spread on Florence Nightingale, but otherwise, you’d be forgiven if you believed that most – if not all – healers in the past were male. The book opens with these eternal words:

It has long been known that Man descended from ape-like ancestors. The process of evolution spanned many hundred of thousands of years. Gradually he came down from the trees, learned to walk on two feet, lost much of his physical strength and, instead, developed a bigger head and brain. (Snarky emphasis my own)

Thankfully, children’s books are not written in this way anymore. 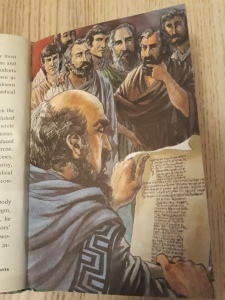 Hippocrates, the ‘Father of Medicine’ in the Ladybird The Story of Medicine, 1972

The spread on Hippocrates is pure gold. Of course it tells us that Hippocrates was the Father of Medicine (with capital letters). I won’t be so mean as to point out all the myths it perpetuates, but I must comment on the accompanying illustration, which is amazing. It shows the bald Hippocrates (for Hippocrates was bald, you know) reading the Hippocratic Oath to a group of male students. Now, the illustrator must have done quite a lot of research here. His portrait of Hippocrates is reminiscent of that by Peter Paul Rubens, and his Hippocratic Oath is presented in the shape of a cross, as it was in several medieval manuscripts. Today, with the wonders of the internet, I can find such information within seconds, but that was not the case in the 70s. 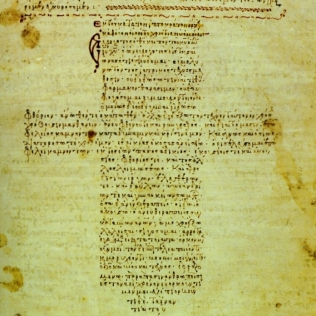 In the Middle Ages, copyists set the Hippocratic Oath in the shape of a cross to give a Christian veneer to a pagan text. However, it is quite absurd to depict Hippocrates himself writing the Oath (which he didn’t write himself anyway) in that shape. I wonder how many children in the 70s and 80s spotted this and asked themselves questions about the symbolism of the cross in the classical Greek world. Perhaps those lovely illustrations, however problematic they might be, spurred on a passion for the history of medicine, which turned into academic research. For one always has to start somewhere.

This entry was posted in History of medicine, Wales and tagged Hay-on-Wye, Hippocrates, USSStrike. Bookmark the permalink.

3 Responses to ‘The father of Medicine’: Strike diary 2