Posted on October 13, 2014 by laurencetotelin

I have two favourite times of year: the first is when the cherries are in bloom; and the second, which has just come to an end, is the beginning of the autumn, when the blackberry brambles are in fruit. The blackberry season has been particularly wonderful this year: a dry end of summer has produced berries that were small, firm and extremely tasty. There is nothing quite like going for a long walk on a sunny autumn day and gorging oneself with berries. Little Boy G. shares my love of berries, unlike his brother and father, who for reasons I cannot fathom, are not that bothered. Little Boy G. made his mother proud by spotting extremely good berry spots; intrepidly throwing himself in the brambles; and covering himself from head to toe in purple juice. Had we been less greedy we would perhaps have gathered the berries to make a crumble, but let’s face it, blackberries are at their best when they taste of autumn sun. 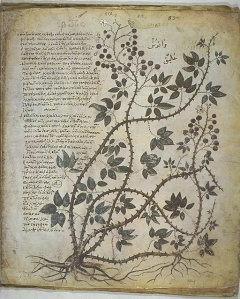 Illustration of the bramble in the #Vienna Dioscorides”, folio 83v. Source: Wikipeda.

So what are the properties of blackberries according to the Greeks and Romans? Dioscorides (first century CE, author of the most famous ancient herbal) has, perhaps surprisingly, little to say: blackberries are good for mouth ulcers and for diorrhea when half-ripe (Dioscorides, Materia Medica 4.37). More noteworthy is the bramble illustration found in the so-called ‘Vienna Dioscorides’ manuscript, which is a beautifully illustrated early-sixth century manuscript that contains the text of Dioscorides. Note how the text espouses the intricate shape of the bramble; this indicates that the drawing was done before the text was added.

To find a good ancient description of the properties of blackberries, one has to turn to Galen (second century CE, the most prolific medical author of antiquity). This is what he wrote in his Properties of Foodstuffs:

People in our region [that is, in Asia Minor] call the fruit of the bramble [batos in Greek] ‘blackberries’ [batina in Greek]… Blackberries are more astringent than mulberries, and if someone consumes too many of them, they will suffer from headache. Some people also suffer from the throat [when they eat too many]. For that reason, one must wash them thoroughly before one attempts to consume this fruit, which is no less necessary in the case of the mulberry. However, blackberries do not move the bowels, but rather are constipating, and if someone dries and stores the unripe berries, they become even more able to check [diarrhea]. Galen, On the Properties of Foodstuffs 2.13 (6.589 Kühn).

Galen refers to his own region, that around Pergamum, with the Greek phrase par’hēmin, which literally translates as ‘among us’. Each time Galen uses that phrase, there is a real sense that he has discussed matters with some of his ‘neighbours’. Interestingly, the blackberry does not appear to have had a name in all parts of the Greek world. In many texts, it is simply called ‘the fruit of the bramble’. The people of Pergamum, in their extreme wisdom, gave the berries the rather cute-sounding name ‘batina’ (batinon in the singular, but let’s face it, nobody will eat just one blackberry…).  They observed some side-effects to the over-consumption of blackberries (again, I am not sure how one can under-consume blackberries); side-effects that are worse with unwashed berries. The recommendation to wash the berries, to my knowledge, is not found anywhere else in Greek literature. Here is a rare example of ‘common sense’ being written down. This is of course wise advice, but needless to say, I have not always heeded it….