Posted on August 8, 2013 by laurencetotelin

Today I am preparing some cosmetics for my mother’s birthday. For as long as I can remember, my mum has suffered from very dry feet. And I mean dry, with sore cracked heels. When she last came to visit in April, she kindly accepted to be a guinea pig for some of my concoctions. We tried a foot-bath in lukewarm water to which we added some salts from the Dead-Sea; followed by some scrubbing with my Pompeian Pumice Pediscrub™ (all resemblance to ancient Roman creams is purely coincidental – see below for recipe); and moisturizing with my Blooming Gorgeous Balm. A few months later, my mum reports healed soles and softer feet.

So how did the Greeks and Romans care for their feet? After all they were all sandal wearers – weren’t they? And we all know what sandal-wearing can do to our feet. It appears that some indulged in scented pedicures, a practice frowned upon by the ever sanctimonious Pliny the Elder (first century CE):

We have even seen people put scent on the soles of their feet, a practice said to have been taught to the emperor Nero by Marcus Otho; pray how could it be noticed or give any pleasure from that part of the body? (Natural History 13.22. Translation: H. Rackham)

Clearly Pliny was not one for a lovely pedicure with foot massage – reflexology not so much his cup of tea. But surely, he could see the point of removing foot odour, couldn’t he? I mean, I know that smell perception is culturally constructed, and that no-one smell is universally disliked, but still, foot odour?

While it might not have been acceptable to indulge in pedicures, treating one’s cracked heels or chilblains was.  Dioscorides (first century CE) recommends wheat bran, pitch , and squill (Materia Medica 1.72; 2.85; 2.172) to treat feet crevices. And Paul of Aegina has several simple recipes, including one that involves equal amounts of goat’s fat, wax and oil (3.79.4). More complex recipes are also preserved. Thus Oribasius (fourth century CE) has the following:

Against crevices in the sole of the feet: laurel-bays, dried iris, frankincense, of each 60 drams; burnt copper, 20 drams; natron, ammoniac salt, of each six drams; pellitory, wild grapes, cachrys [a plant], Cnidian berry, mustard, dove dung, birthwort, cumin, verdigris, galingale, seed of rocket, of each 8 drams; vinegar, 12 kotylai [a liquid unit, approximately 275 ml]. Crush under the burning heat of the Dog’s Star until all the vinegar has been used up and dried up. Then do the following: take fleshy figs, 12 ounces. Boil it in 12 kotylai of water until a third remains, and transfer into a copper vessel, passing it through a sieve. Mix with the medicament and mould pastilles. Dry these. (Oribasius, Eclogae medicamentorum 96.3)

In modern terms, I think that the principle of this recipe is to mix various alkalis with herbal products in order to hydrate the skin – but I am no chemist and could be completely wrong. Paul of Aegina, for his part, has the following intriguing remedy against chilblains.

‘Marcellion’ against chilblains: hollow out the root of a turnip and fill it with wax, 2 ounces, and mastic oil. Boil in the double-boiler and pour this either in sea water, or brine or decoction of lupine. And let the melted cerate cool down in the turnip and apply. (Paul 3.79)

I think I’ll have to try this one out to understand what it is really about. For now, enough of Greek stuff. Here is a recipe for lovely soft feet. It is inspired by recipes in Carla Oates, Feeding your Skin, London, 2007 and Karen Gilbert, A Green Guide to Natural Beauty: 35 Step-by-Step Projects for Homemade Beauty, London, 2011. It is an oil-water emulsion, which means that it has to be prepared in three phases:

1)      Heat up the cocoa butter and apricot kernel oil in a double-boiler;

2)      When the ingredients have melted, take off the heat and let the preparation cool down;

3)      Meanwhile, heat up the water and glycerin in another double-boiler;

4)      This is the tricky bit: both the oil phase and water phase must reach the same temperature to be mixed together. You will need to use a cooking thermometer for this, and you might need to reheat one of the phases for a short time;

5)      When both phases have reached 75°c, slowly combine the water phase to the oil phase over a low heat, mixing all the while with the hand-held mixer;

6)      Once the oil phase and water phase have combined, remove from the heat and place your preparation in a bowl. Place that bowl within another bowl filled with cold water;

7)      Mix with the hand-held mixer until the preparation thickens. Once this preparation has cooled down, you could use it as a cream if you do not want to add pumice stone.

8)      While the preparation cools down, crush the pumice stone in a mortar;

9)      When the preparation has cooled down, add the essential oils and the crushed pumice stone;

10)  Place in a sterilized container. I used a little Ainsley box which I found in a charity shop. I washed it thoroughly and sterilized it before use; 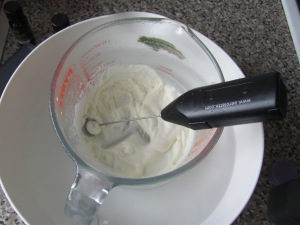 The cream is starting to thicken 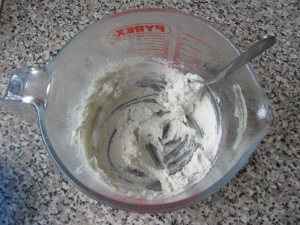 The scrub once the pumice has been added

This entry was posted in Cosmetics, History of medicine and tagged crevices, Dioscorides, feet, footscrub, Oribasius, Paul of Aegina, Pliny the Elder. Bookmark the permalink.

2 Responses to Finding my feet